An independent Wales could afford to invest an extra £3 billion a year in public services, such as universal free childcare and public transport, according to Melin Drafod’s new report.
The discussion paper comes to the conclusion that there is a “credible argument that Wales would face a deficit … that would make [it] as capable as the vast majority of European countries to be independent.”
The Melin Drafod research claims it would be prudent to improve Wales’ fiscal position by around 6-7% of GDP over a period of years through policy changes including:
It also suggests that, if negotiations with the rest of the UK followed international precedent and its policy changes introduced, Wales would have around £3 billion a year extra to invest.
The think tank proposes that money could go to projects such as free universal childcare and a program to decarbonise the transport, energy and housing systems.
Talat Chaudhri, Chair of Melin Drafod, the think tank which examines the implications of Wales becoming an independent nation, said:
“Hopefully this paper will stimulate an even more detailed policy discussion about the path towards establishing Wales as an independent, successful and progressive state. It is often said that Wales’ fiscal situation is one of the biggest obstacles by organisations trying to convince the public of the case for Welsh independence. The paper we are publishing today shows not only that there is a strong argument that Wales could afford independence, but that there is an opportunity to create a new society. A much fairer, greener and peaceful country than the one trapped in a failed and completely unfair UK economic system.”
Melin Drafod’s discussion paper is the result of consultation with a variety of experts.
Tegid Roberts, Founder of Banc Cambria, Cadarn and Director of Quantum Soup Studio, commented:
“This paper is not only an excellent summary of the work done to date on Welsh finances, but also a starting point for a much wider discussion about what the Welsh society and its economy should be. That wider discussion has the advantage of rejecting Westminster orthodoxy and starting afresh. It can consider a Welsh central bank and currency and it can also take a blank sheet to the welfare system and our tax system as well. At this stage nothing should be off the table other than the Welsh society should come first and its economy a function of that and not the other way around.”
Mark Hooper, Founder of IndyCube and Banc Cambria added:
“This paper, for me, is an important conversation starter. Wales needs a deep and challenging debate regarding the type of society we need, and the type of state that’s therefore required. The economy we need to deliver that gets constructed around the answers to those questions.
“This is a hugely exciting and invigorating time for us, as we build a new Wales; let’s avoid being restricted in our thinking with the stuff that we know doesn’t work. The independence movement must enable these important and defining conversations now.” 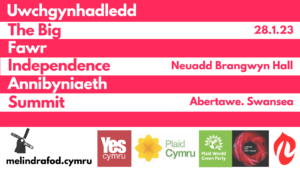 We have sold out of tickets for this event – for more information contact post@melindrafod.cymru

Groups campaigning for independence for Wales have joined forces to hold a summit in Swansea next month (28 January 2023).

The organisers from the think tank Melin Drafod say the event will be a chance for campaigners to discuss how Wales becomes independent.

The event comes amid further discussion about uniting the island of Ireland and all recent polling showing majority support for Scottish independence.

A recent ruling from the UK supreme court denying an independence vote also raises questions about how people in Wales could have their say.

“We are coming together because Wales needs to discuss its strategy to become an independent state. There is no time to lose – with the UK quickly unravelling, Wales needs to be ready for its future as a progressive, independent country.

“Wales’ independence is in touching distance, but we need a plan to ensure that we can use the powers of independence to build together a society that is fair, green and progressive. If we get the plan right, we can be a beacon to the rest of the world.

“We cannot rely on others to shape our destiny for us: we, the ordinary citizens of Wales, need to take the lead ourselves.”

The independence summit will be held on Saturday 28 January in the Brangwyn Hall in Swansea. Further information can be found by clicking here.

Groups campaigning for independence, including the Green Party and Plaid Cymru, have joined forces to call for the right of the Senedd to hold a referendum on Welsh independence.

In an open letter to the Constitutional Commission established by the Welsh Government, groups and parties including YesCymru, Cymdeithas yr Iaith, Plaid Cymru, the Wales Green Party, Undod and Labour for an Independent Wales call for an unfettered right for the Senedd to trigger a public vote on the question.

The letter states: “We are jointly writing to underline one particular point of principle that we have in common: the fundamental right of the people of Wales to decide their own constitutional status.

“In terms of the work of your Commission, we therefore call for the right for Wales, through its elected Senedd, to decide whether or not it should be an independent country, without interference from Westminster.”

The groups warn that a clear process is needed because of the uncertainty seen in countries like Catalonia and Scotland. The letter continues:

“There should be a clear process and mechanism that will allow Wales to hold a referendum on independence. The timing and associated details of that vote should be matters for the people of Wales and their Senedd to decide, not Westminster.”

The letter was co-ordinated by the think tank Melin Drafod and Talat Chaudhri its Chair said:

“The Welsh Government’s Commission needs to show that it is seriously considering independence. The members need to set out a practical plan to enable the people of Wales to make their own choice. At the moment, even to ask the question, it’s at the whim of the government in London. That needs to change at the very least.”

Writing in a new book being published at the National Eisteddfod, Dafydd Iwan claims that Wales’ community traditions will be a major advantage when the country gains its independence.
The legendary musician and activist makes the comments in a collection of articles, entitled ‘Imagining an Independent Wales’.
Published by Melin Drafod – a think tank that says it is setting a progressive agenda for an independent Wales – the book will go on sale for the first time at the National Eisteddfod in Tregaron next month.
[Buy a copy here]
Among the others who have contributed to the publication are rugby commentator Eddie Butler, former Plaid Cymru leader Leanne Wood, author Mike Parker, and children’s rights campaigner Mercy Shibemba.
In his article, Dafydd Iwan says:
“As a people, we have strengths in our traditions that need to be preserved and developed as we plan the new Wales. And one of those strengths is the power of the local community, and its potential to create and maintain a strong and sustainable culture and economy. What’s happening with the purchasing of community pubs at the moment is a magnificent example of what I have in mind.
“Perhaps we do not fully appreciate the fact that the voluntary tradition is so strong in our way of life … looking to our tradition of choirs and brass bands for example. And many singers who have reached the heights of the professional singing world are very ready to pay tribute to the local eisteddfod tradition as the place where the foundations for their career were laid.”
Speaking about the reasons for releasing the book, Talat Chaudhri, Chair of the think tank Melin Drafod, said:
“The main message we would like people to take from this book is to begin to imagine: imagine what we can be. Now is the time for us to discuss what is possible, free from the old Westminster structures, free in the new Wales.
“We would like to thank all the contributors for their articles, and we really hope they will inspire others. Now is the time to prepare for independence and to get to grips with the questions we face as a nation because of the growing support for it.”
Pro-independence groups have said they intend to establish a convention to outline how Wales can become a free state.
The groups say Wales must have its own plan to achieve independence, especially with a Scottish referendum due in 2023.
The new think tank, Melin Drafod, will bring together a coalition of groups to look at practical questions including finance, currency and international relations.
Their aim is to present an initial plan by the end of 2022, with a final report published by summer 2023.
Chair of the new think tank Melin Drafod, Talat Chaudhri, said:
“Wales needs to be ready to take its opportunity to join the rest of the free nations of the world. There is no time to lose – with the UK quickly unravelling, Wales needs to be ready for its future as a progressive, independent country.
“Wales’ independence is inevitable. We are coming together because we need a plan to ensure that we can use the powers of independence to build together a society that is fair, green and progressive. If we get the plan right, we can be a beacon to the rest of the world.”
“We cannot rely on others to shape our destiny for us: we, the ordinary citizens of Wales, need to take the lead ourselves.”
Among the groups who will be supporting the Independence Convention are Cymdeithas yr Iaith, former members of YesCymru’s national committee, Welsh Football Fans for Independence, AUOBCymru and Undod.